The Order of Melchizedek 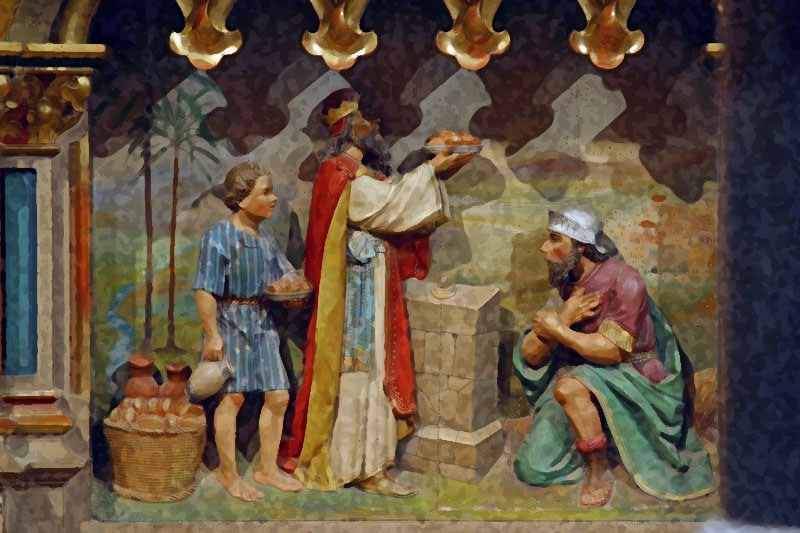 Hebrews 6:19-20 NKJV
[19] This hope we have as an anchor of the soul, both sure and steadfast, and which enters the Presence behind the veil, [20] where the forerunner has entered for us, even Jesus, having become High Priest forever according to the order of Melchizedek.

Note: Fasten your seatbelts! This is a pretty intense study and you should allow yourself the time to really dig in. Read on your own Hebrews Chapters 7-9.

What does it mean when we read about Jesus becoming the High Priest forever according to the “order of Melchizedek?”

Melchizedek first appeared in the Bible in Genesis 14:18 after a battle against Sodom and Gomorrah when Abram’s nephew, Lot, had been taken captive, along with women, children and their possessions. Abram took 318 men and rescued his nephew with all of his goods as well as the women and children (Gen 14:16).

After the fierce battle and defeating the kings of Sodom and Gomorrah, Melchizedek mysteriously comes on the scene and gave Abram and his men bread and wine and blessed Abram. Abram saw that this was a priest higher than himself and gave Melchizedek a tithe, 10% of all he owned.

Genesis 14:16-20 NKJV
[16] So he brought back all the goods, and also brought back his brother Lot and his goods, as well as the women and the people. [17] And the king of Sodom went out to meet him at the Valley of Shaveh (that is, the King’s Valley), after his return from the defeat of Chedorlaomer and the kings who were with him. [18] Then Melchizedek king of Salem brought out bread and wine; he was the priest of God Most High. [19] And he blessed him and said: “Blessed be Abram of God Most High, Possessor of heaven and earth; [20] And blessed be God Most High, Who has delivered your enemies into your hand.” And he gave him a tithe of all.

“Some propose that Melchizedek was actually a pre-incarnate appearance of Jesus Christ, or a Christophany. This is a possible theory, given that Abraham had received such a visit before. Consider Genesis 17 where Abraham saw and spoke with the Lord (El Shaddai) in the form of a man.”  Reference gotquestions.org

Whether Melchizedek was a pre-incarnate of Christ appearing to Abram, or just a high priest, we don’t know for sure, but we do know that His name means “king of justice, righteousness and peace.” So he was a biblical person that points to Christ.

Need for a New Priesthood

Fast-forward to the book of Hebrews, the writer (most believe was Paul) explains what the Order of Melchizedek really means.

In the Levitical Law, the descendants of Aaron were the only priests allowed into the Tabernacle of the Holiest of All. This was only allowed once per year to make a blood sacrifice and offering for the atonement of the sins of the people.

“This small innermost room was a Most Holy Place that contained the Ark of the Covenant, a gold-covered chest containing the original stone tablets of the Ten Commandments, a jar of manna, and Aaron’s staff that budded (Numbers 17). This Most Holy Place was the most sacred spot on earth for the Jewish people, and it was only the earthly high priest that could enter it once per year. The people’s only access to God was through the high priest, where he would offer a sacrifice and use animal’s blood to atone for his sins and the sins of the people.” Reference Life Application Study Bible Notes, Hebrews 9:6-8

There were some obvious issues with the Levitical Law:

When Jesus took his last breath on the cross, the veil of the temple tore from top to bottom. This veil was the separator between regular people and the Holy Tabernacle of God. When this happened, it was the first time in history that all people had direct access to God.

Matthew 27:50-51 NKJV
[50] And Jesus cried out again with a loud voice, and yielded up His spirit. [51] Then, behold, the veil of the temple was torn in two from top to bottom; and the earth quaked, and the rocks were split,

Jesus’ sacrifice on the cross was an eternal blood sacrifice, paying the price for our sins and fulfilled the new covenant because:

Hebrews 7:23-25 NKJV
[23] Also there were many priests, because they were prevented by death from continuing. [24] But He, because He continues forever, has an unchangeable priesthood. [25] Therefore He is also able to save to the uttermost those who come to God through Him, since He always lives to make intercession for them.

Hebrews 8:1-2 NKJV
[1] Now this is the main point of the things we are saying: We have such a High Priest, who is seated at the right hand of the throne of the Majesty in the heavens, [2] a Minister of the sanctuary and of the true tabernacle which the Lord erected, and not man.

Hebrews 9:15 NKJV
[15] And for this reason He is the Mediator of the new covenant, by means of death, for the redemption of the transgressions under the first covenant, that those who are called may receive the promise of the eternal inheritance.

Hebrews 9:23 NKJV
[23] Therefore it was necessary that the copies of the things in the heavens should be purified with these, but the heavenly things themselves with better sacrifices than these.

Why All The Blood?

“Why does forgiveness require the shedding of blood? This is no arbitrary decree on the part of a bloodthirsty God, as some have suggested. No greater symbol of life exists than blood. Blood keeps us alive (Leviticus 17:11). Jesus shed his blood—gave his life—for our sins so that we wouldn’t have to experience spiritual death and eternal separation from God. Jesus created life, not death. With his own life he paid our penalty so that we could live. After shedding his blood for us, Christ rose from the grave and proclaimed victory over sin and death.” Reference Life Application Study Bible Notes, Hebrews 9:22

We are all here on the earth for a season, but this is just a shadow of what is to come in eternity. James 4 tells us that our life is like a vapor that appears for a time and then vanishes away. But God has redeemed us through His Son in the Order of Melchizedek to give us eternal salvation from everlasting to everlasting.

This is our hope and good news. That is why we don’t fear the turmoil, pandemics and turbulence of this world. We know that death cannot kill us if we have accepted Jesus as our Lord and Savior. Death to this body means that we are present with The Lord!

Colossians 2:17 GNT
All such things are only a shadow of things in the future; the reality is Christ.

Hebrews 9:27-28 NKJV
[27] And as it is appointed for men to die once, but after this the judgment, [28] so Christ was offered once to bear the sins of many. To those who eagerly wait for Him He will appear a second time, apart from sin, for salvation.

James 4:14 NKJV
[14] whereas you do not know what will happen tomorrow. For what is your life? It is even a vapor that appears for a little time and then vanishes away.

Psalm 103:17 NKJV
[17] But the mercy of the LORD is from everlasting to everlasting On those who fear Him, And His righteousness to children’s children,

2 Corinthians 5:8 NKJV
[8] We are confident, yes, well pleased rather to be absent from the body and to be present with the Lord.