The Trustworthy Prophetic Word of God 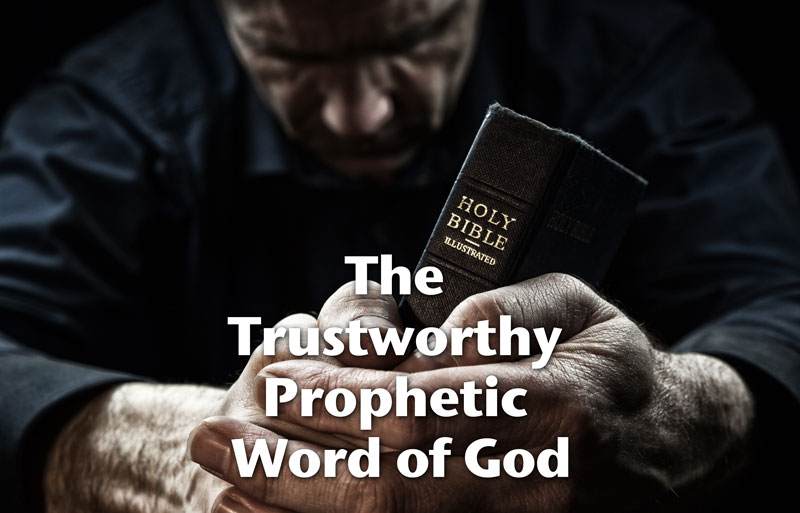 2 Peter 1:16-21 ERV
[16] We told you about the power of our Lord Jesus Christ. We told you about his coming. The things we told you were not just clever stories that people invented. No, we saw the greatness of Jesus with our own eyes. [17] Jesus heard the voice of the great and glorious God. That was when He received honor and glory from God the Father. The voice said, “This is my Son, the one I love. I am very pleased with him.” [18] And we heard that voice. It came from heaven while we were with Jesus on the holy mountain. [19] This makes us more sure about what the prophets said. And it is good for you to follow closely what they said, which is like a light shining in a dark place. You have that light until the day begins and the morning star brings new light to your minds. [20] Most important of all, you must understand this: No prophecy in the Scriptures comes from the prophet’s own understanding. [21] No prophecy ever came from what some person wanted to say. But people were led by the Holy Spirit and spoke words from God.

Good Morning!
Imagine being the Apostle Peter nearly 2000 years ago. You witnessed first-hand the works and teaching of Jesus. Then later wrote about it and these words were handed down for generations upon generations in the Bible. Peter spent the rest of his life preaching and teaching what he learned first-hand from Jesus and saw with his own eyes the miracles that took place. He even heard the Father’s voice loudly proclaiming that “This is my son in whom I am well pleased.” He later died a horrible death while defending his faith, being crucified upside-down because tradition tells us that he said he was not worthy to die the same death as his savior.

We can be confident in the words of the Bible because so many thousands of Christians who saw Jesus in person, died a martyrs’ death defending what they saw was true. Think about that…would they have died horrible, bloody, painful deaths if they did not believe what they saw? Of course not, they would have denied it to save their lives. Ever since then, Christians have carried the Word of God forward to pass it on to future generations as the Remnant of God.

And today, 2000 years later, these trustworthy prophetic words that have been passed down through the ages are still as relevant as they were back then. God never changes. He is the same yesterday, today and forever. We can trust in His Word and have confidence that His words do not return void or empty.

Be confident in knowing that the Bible is real, true and prophetic. Jesus’ life was prophesied thousands of years before His arrival and all of the prophesies came true. In the same way, His return has been prophesied and will one day come true, just as it is prophesied. We must all be ready for that glorious day that will happen like a flash of lightning!

Hebrews 13:7-9 ERV
[7] Remember your leaders. They taught God’s message to you. Remember how they lived and died, and copy their faith. [8] Jesus Christ is the same yesterday, today, and forever. [9] Don’t let all kinds of strange teachings lead you into the wrong way. Depend only on God’s grace for spiritual strength, not on rules about foods. Obeying those rules doesn’t help anyone.

Isaiah 55:10-11 NKJV
[10] “For as the rain comes down, and the snow from heaven, And do not return there, But water the earth, And make it bring forth and bud, That it may give seed to the sower And bread to the eater, [11] So shall My word be that goes forth from My mouth; It shall not return to Me void, But it shall accomplish what I please, And it shall prosper in the thing for which I sent it.