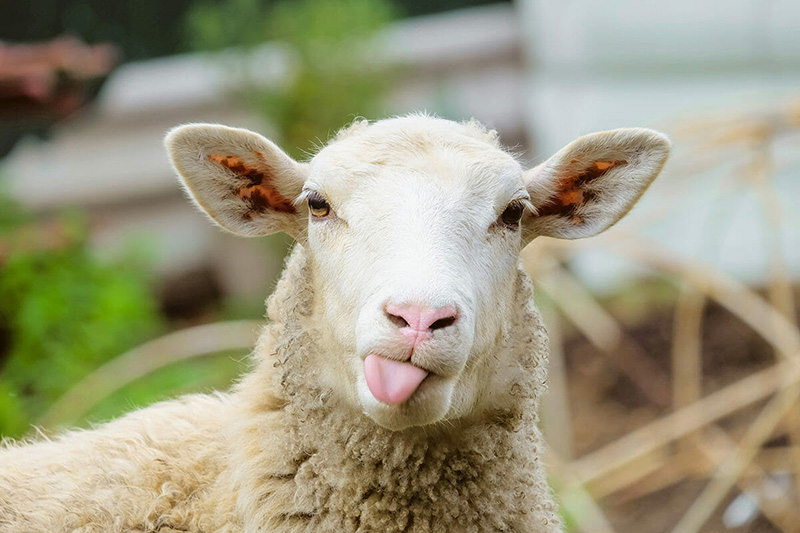 Good Morning!
To understand what Jesus meant by verse 7, you must read the context of this statement here:

John 10:1-10 ERV
[1] Jesus said, “It is certainly true that when a man enters the sheep pen, he should use the gate. If he climbs in some other way, he is a robber. He is trying to steal the sheep. [2] But the man who takes care of the sheep enters through the gate. He is the shepherd. [3] The man who guards the gate opens the gate for the shepherd. And the sheep listen to the voice of the shepherd. He calls his own sheep, using their names, and he leads them out. [4] He brings all of his sheep out. Then he goes ahead of them and leads them. The sheep follow him, because they know his voice. [5] But sheep will never follow someone they don’t know. They will run away from him, because they don’t know his voice.” [6] Jesus told the people this story, but they did not understand what it meant. [7] So Jesus said again, “I assure you, I am the gate for the sheep. [8] All those who came before me were thieves and robbers. The sheep did not listen to them. [9] I am the gate. Whoever enters through me will be saved. They will be able to come in and go out. They will find everything they need. [10] A thief comes to steal, kill, and destroy. But I came to give life-life that is full and good.

In this passage, basically Jesus is telling us that as the Door of the Sheep, He is the only door or gateway to heaven. Time after time in history, there has been hundreds or even thousands of false doctrines preached. Jesus is saying that these are the thieves that come to steal, kill and destroy. They are the ones that try to climb into the pen some other way and give false doctrines about the way to heaven. But we as followers of Christ, the Good Shepherd, know the voice of our Shepherd and know not to follow stranger’s that will lead us to destruction. We know that through Christ, we have the way that leads to eternal life.

Many will argue that that this is offensive, that there is no other way to heaven. But as Pastor Joe of Calvary Chapel Philadelphia has said many times in his preaching, we should be thankful that there is a way. The fact that God made a way for us to have salvation is something that we should not take lightly. Many will follow the pathway of destruction and follow those “thieves” that come to steal, kill and destroy. But Jesus stands at the entrance to the sheep fold. He gives us entry into His flock, making us one of His own and an heir to the throne of God. There is only one way and Jesus is the door of the sheep.

This passage has a dual purpose:
1. To give God’s people the true, right and only way to enter the kingdom of heaven;
2. To warn us of the false doctrines that many will try to preach as truth.

Thank God we have a door to the sheep!

We must be on guard and ready to defend the Gospel with God’s truth. Shortly, we’ll be studying the armor of God, which prepares us daily for the battles that we will face.

2 Peter 2:1-3 NKJV
[1] But there were also false prophets among the people, even as there will be false teachers among you, who will secretly bring in destructive heresies, even denying the Lord who bought them, and bring on themselves swift destruction. [2] And many will follow their destructive ways, because of whom the way of truth will be blasphemed. [3] By covetousness they will exploit you with deceptive words; for a long time their judgment has not been idle, and their destruction does not slumber.

Revelation 2:2-3 NKJV
[2] “I know your works, your labor, your patience, and that you cannot bear those who are evil. And you have tested those who say they are apostles and are not, and have found them liars; [3] and you have persevered and have patience, and have labored for My name’s sake and have not become weary.

Ephesians 4:14 ERV
[14] Then we will no longer be like babies. We will not be people who are always changing like a ship that the waves carry one way and then another. We will not be influenced by every new teaching we hear from people who are trying to deceive us-those who make clever plans and use every kind of trick to fool others into following the wrong way.

1 Timothy 6:20-21 ERV
[20] Timothy, God has trusted you with many things. Keep these things safe. Stay away from people who talk about useless things that are not from God and who argue against you with a “knowledge” that is not knowledge at all. [21] Some people who claim to have that “knowledge” have gone completely away from what we believe. God’s grace be with you all.

Jude 1:4 ERV
[4] Some people have secretly entered your group. These people have already been judged guilty for what they are doing. Long ago the prophets wrote about them. They are against God. They have used the grace of our God in the wrong way-to do sinful things. They refuse to follow Jesus Christ, our only Master and Lord.