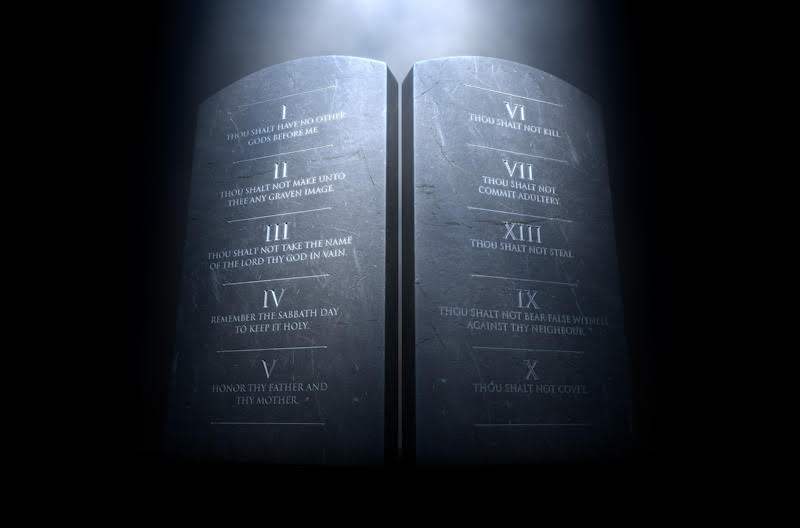 Romans 5:20-21 TLB
[20] The Ten Commandments were given so that all could see the extent of their failure to obey God’s laws. But the more we see our sinfulness, the more we see God’s abounding grace forgiving us. [21] Before, sin ruled over all men and brought them to death, but now God’s kindness rules instead, giving us right standing with God and resulting in eternal life through Jesus Christ our Lord.

Good Morning!
Since Adam and Eve, everyone has been born into sin. The Ten Commandments and all of the laws of Moses in the Old Testament were put in place so that people would have moral direction. These were not suggestions, they were commandments. Yet men and women still broke the commandments, as we all have the sinful nature we were born with. We are not able to be righteous in our own effort. Even the most righteous of men is still unclean in God’s eyes. So God gave us Jesus, our Savior, to bear our sins for us so that we could stand as righteous before Him.

Isaiah 64:6 NKJV
[6] But we are all like an unclean thing, And all our righteousnesses are like filthy rags; We all fade as a leaf, And our iniquities, like the wind, Have taken us away.

God made man to be His crowning glory. He loves us so much that, even though we all sin and break His heart, He created a way for us to be made whole. The eternal sacrifice that Jesus did, giving His life on the cross for us, not only makes us righteous before God, but allows us to be heirs to the throne — when we accept Jesus as our Lord and Savior, God not only saves our souls, but makes us joint-heirs to the throne of God with Christ, where we’ll live throughout eternity in His kingdom as sons and daughters of God.

Romans 8:16-17 NKJV
[16] The Spirit Himself bears witness with our spirit that we are children of God, [17] and if children, then heirs-heirs of God and joint heirs with Christ, if indeed we suffer with Him, that we may also be glorified together.

This is God’s Grace — Jesus died a death He didn’t deserve so that we can live a life that we don’t deserve. What was meant for evil as men tortured and crucified Jesus on the cross, God was able to use for His good, saving all of humanity, those that will accept Jesus as Lord and Savior.

In the Old Testament, there is a smaller forthcoming of this principle as told by Joseph, who was sold into slavery by his brothers, then later was able to save his family and the people of Egypt from famine by rising to power as the Pharaoh’s right hand man and storing up the sustenance needed for the 7 years of famine.

Genesis 50:20 NKJV
[20] But as for you, you meant evil against me; but God meant it for good, in order to bring it about as it is this day, to save many people alive.

Today, we have the historic and Biblical record of what has happened over the last several thousand years. There’s undeniable proof that Jesus walked this earth and performed thousands of miracles. We know that in Christ wherever there is sin, there is Grace even more abundantly. He is faithful and just to forgive us as we live our lives for him.

Romans 8:28 NIV
[28] And we know that in all things God works for the good of those who love him, who have been called according to his purpose.

1 John 1:9 NKJV
[9] If we confess our sins, He is faithful and just to forgive us our sins and to cleanse us from all unrighteousness.

Let God work out the good in your life. Let go of your plans and let God’s plans rule over your hearts. His Grace abounds wonderfully and His plans will always succeed.